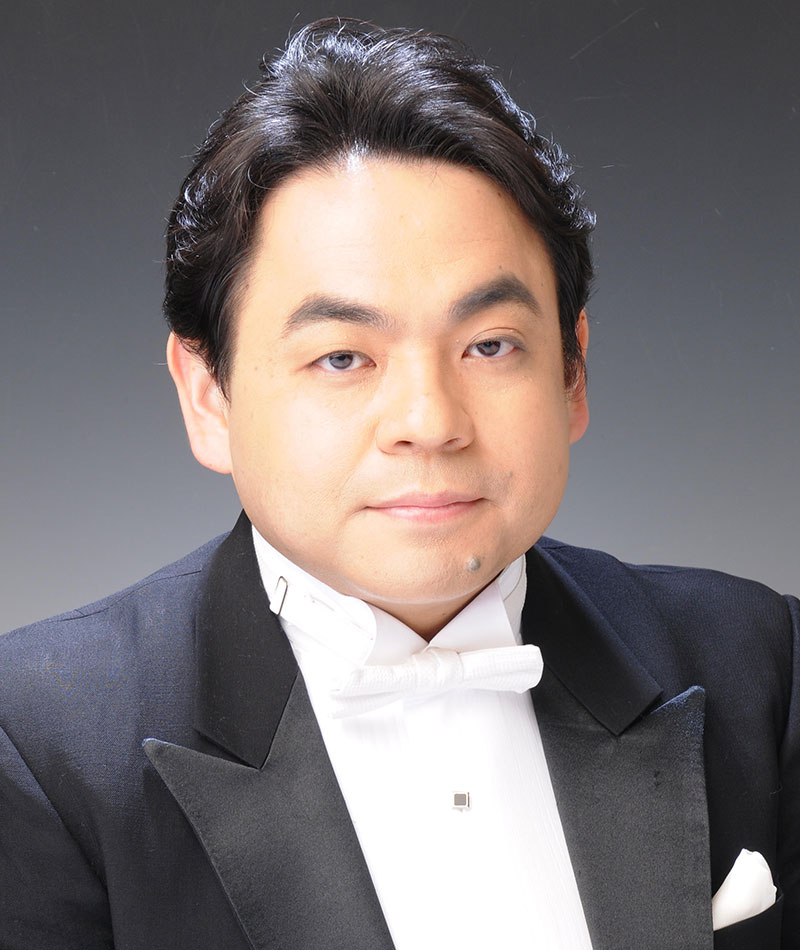 Born in Kagoshima in 1969, Tatsuya Shimono cemented his international reputation as a conductor by winning the First Prize at the 47th Besançon International Competition in 2001. Since then he has regular relationships with a number of international orchestras including Orchestra dell’Accademia Nazionale di Santa Cecilia, Czech Philharmonic Orchestra, Stuttgart Radio Symphony Orchestra, Orchestre National des Pays de la Loire, Südwestdeutsche Philharmonie Konstanz and Silicon Valley Symphony, alongside with major Japanese orchestras.
In 2006 Shimono was appointed Resident Conductor of the Yomiuri Nippon Symphony Orchestra and served as their Principal Guest Conductor from 2013 through 2017. In April 2017 he became General Music Director of the Hiroshima Symphony Orchestra. Shimono is currently also Music Director of the Hiroshima Wind Orchestra and Principal Guest Conductor of the Kyoto Symphony Orchestra.
In addition to his work with symphony orchestras Shimono’s opera conducting has included Die Zauberflöte, Hänsel und Gretel and The Merry Widow at Nikikai Opera, Medea, Lear (both composed by Aribert Reimann) and Hänsel und Gretel at the Nissay Theatre, La Forza del Destino at the Japan Metropolitan Opera and The Silence (Teizo Matsumura) at New National Theatre Tokyo. He has been invited to a plethora of music festivals, including the Affinis Music Festival, the Kirishima International Music Festival, the Miyazaki Music Festival, and the Beppu Argerich Music Festival. He was resident conductor at the 2010 Saito Kinen Festival that included conducting four concerts with the Saito Kinen Orchestra. Following on from this he made his North American debut with the orchestra at Carnegie Hall. Contemporary music forms an important part of Shimono’s career, conducting repertoire across the spectrum including Ades, Cage, Glass, Gruber HK, Adams, Takemitsu and Hosokawa.
Tatsuya Shimono’s recordings include Strauss Ein Heldenleben with the Czech Philharmonic Orchestra and Bruckner Symphony in D minor (No. 0) with the Osaka Philharmonic Orchestra.
Tatsuya Shimono received numerous awards such as the Idemitsu Music Award, the Akeo Watanabe Music Foundation Award, the Nippon Steel Music Award (New Artist Award), the 6th Hideo Saito Memorial Fund Award.
He was invited to join the faculty of the Kyoto City University of Arts in April 2017. 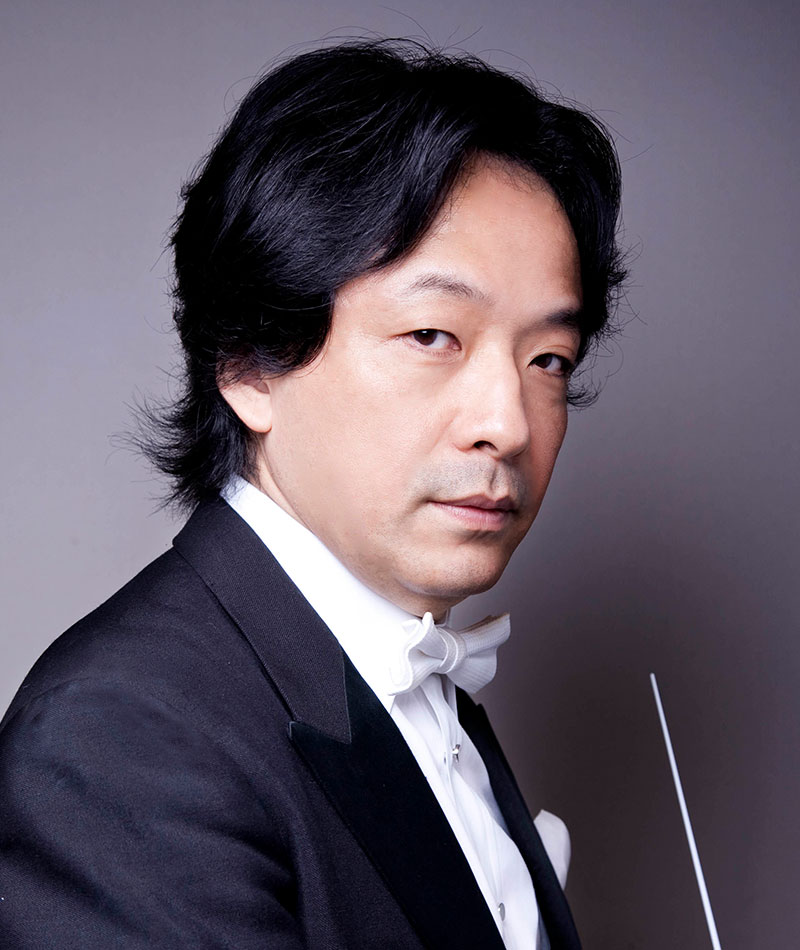 In Germany, he served as the General Music Director at Theater Lübeck, giving great performances both in operas and concerts with the house orchestra (the Lübeck Philharmonic Orchestra). The German media had particular high praise for his performances of the works of Johannes Brahms, Gustav Mahler, Anton Bruckner, and Wilhelm Richard Wagner.

Numajiri’s first time as an opera conductor was in 1997 with Mozart’s Die Entführung aus dem Serail (The Abduction from the Seraglio), produced by the Nissay Theatre. After his debut, he was invited to conduct at the Oper Köln, Bayerische Staatsoper, Komische Oper Berlin, Theater Basel, and Sydney Opera House. At Biwako Hall, where he serves Artistic Director, he conducted Michael Hampe’s new Biwako Ring for four years beginning in 2017 to unprecedented acclaim. His Rhinegold and Siegfried received the Mitsubishi UFJ Trust and Banking Music Award. In March 2020, during the COVID-19 pandemic, his conducting work for Twilight of the Gods, performed without an audience and live-streamed around the world, received global attention.

In January 2014, Numajiri debuted his own original opera production, Taketori Monogatari. He not only composed the opera, but also conducted it, and has performed it both domestically and internationally. The performance at Biwako Hall received the 13th Mitsubishi UFJ Trust and Banking Music Award Encouragement Prize.

In 2021, he received the 51st ENEOS Music Award for Western Music on behalf of the “Shiga Prefectural Center for the Performing Arts (Biwako Hall) and Ryusuke Numajiri”. He was awarded the Medal of Honor with Purple Ribbon by the Emperor of Japan in spring 2017.

Born in Kobe, Shikata was accepted for the 47th Music Competition of Japan while studying at the Tokyo University of the Arts. She took part in the first Kirishima International Music Festival Kagoshima as a member of Tokyo Brahms Quartet, winning the Kirishima International Music Festival Award. Shikata also received second prize for the 15th Min-On Concert and the Hideo Saitō Award.

In 1998, she performed the complete set of Eugène Ysaӱe’s sonatas for solo violin (which had already been released previously as a CD) in Cologne to tremendous praise. Shikata also participated in various music festivals, including the Kirishima International Music Festival and Saitō Kinen Festival. She served the Music Director for the Affinis Music Festival from 2002 and 2018 and has been the concertmistress of the Hyogo Performing Arts Center Orchestra since 2005, as well as the the solo concertmistress of the Tokyo Metropolitan Symphony Orchestra since September 2009.

She was awarded the Hyogo Prefecture Culture Prize in November 2009 and is currently a professor at the Kyoto City University of Arts. 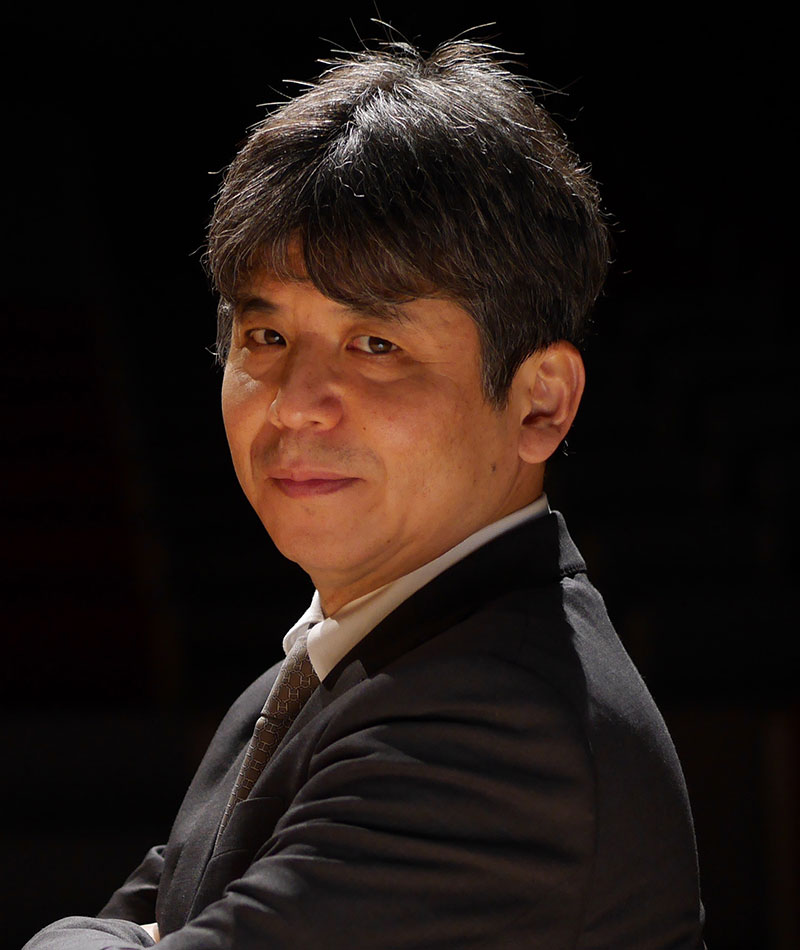 Born in Hiroshima in 1955, Hosokawa studied in Germany for a decade beginning in 1976. He studied composition from Yun Isang at the Berlin University of the Arts and from Klaus Huber at the Hochschule für Musik Freiburg (Freiburg University of Music). In 1980, he took part in the Darmstädter Ferienkurse (Darmstadt Summer Course) for the first time and debuted his own compositions. Since then, he has worked as a composer mainly in Europe and Japan. As a representative of Japanese composers, he has been commissioned by many major orchestras, music festivals, and opera theaters in the west and is highly acclaimed internationally.

In addition to his second opera Hanjo, which was commissioned by the Aix-en-Provence Festival in 2004 and staged by Anne Teresa De Keersmaeker, Hosokawa’s works include Circulating Ocean for orchestra (commissioned by the Salzburg Festival in 2005 and premiered by the Vienna Philharmonic Orchestra) and Woven Dreams for orchestra, which won the 5th Roche Commission and premiered in 2010, first played by the Cleveland Orchestra at the Lucerne Festival, as well as Carnegie Hall, and winning the 2013 British Composer Award.

His third opera, Matsukaze, was commissioned by the Royal Theatre of La Monnaie in 2011 and staged by Sasha Waltz. Horn Concerto: The Moment of Blossoming was jointly commissioned by the Berlin Philharmonic, Barbican Centre, and the Royal Concertgebouw. All of his works were debuted by world-class conductors, including Kazushi Ono, Jun Märkl, Kent Nagano, Simon Rattle, Robin Ticciati, and Franz Welser-Möst. Many of his works have gone on to become permanent pieces in the repertories of their genre and continue to be performed today.

In 2016, his opera Stilles Meer (commissioned by Hamburg State Opera, authored and produced by Oriza Hirata) dealt with the subject of Fukushima after the Great East Japan Earthquake. It was first performed in Hamburg, attracting great deal of attention and receiving high acclaim.

Hosokawa was appointed as a member of the Academy of Arts, Berlin, in 2001. He served as Composer-in-Residence at the Tokyo Symphony Orchestra from 1998 to 2007, the Deutsches Symphonie-Orchester Berlin for the 2006 to 2007 season, the West German Radio Chorus from the 2006 to 2008 season, and the Netherlands Philharmonic Orchestra from the 2013 to 2014 season.

He was also invited to be a Fellow at the Institute for Advanced Study in Berlin from 2006 to 2007 and from 2008 to 2009; he stayed in Berlin during these years. Hosokawa also served as Composer-in-Residence at the Mozart Festival (Würzburg) in 2015 and has been a member of the Bayerische Akademie der Schönen Künste (Bavarian Academy of Fine Arts) since 2012.

In autumn 2012, Hosokawa was awarded the Medal of Honor with Purple Ribbon by the Emperor of Japan, the Japan Foundation Award in 2018, and the Goethe Medal in 2021. He is currently the Music Director of the Takefu International Music Festival and a visiting professor at the Tokyo College of Music and Elisabeth University of Music. He served as Composer-in-Residence at the Hiroshima Symphony Orchestra from 2020 to 2021. 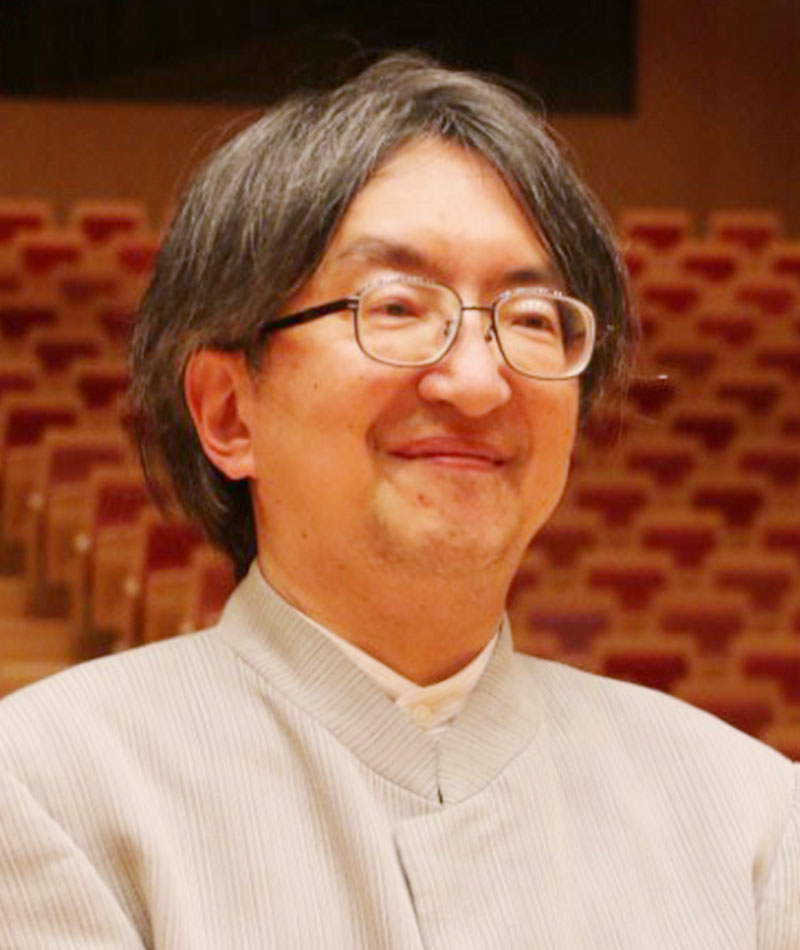 Since he was young, Katayama published music criticism in numerous magazines and newspapers, including the Asahi Shimbun, the Sankei Shimbun, Record Geijutsu, CD Journal, and more. He is currently in charge of writing a regular column in the weekly Shūkan Shinchō magazine and classical music reviews for the Asahi Shimbun. A multifaceted talent across the board, Katayama is also a radio DJ for Kurashikku-no-Meikyū (Classical Labyrinth) every Saturday on NHK-FM, has written books on music, and appeared on television.

For the first time in his career, well-known music critic Katayama now serves as the director of the Mihara Performing Arts Center POPOLO (in Mihara City, Hiroshima), a music facility. His appointment as director attracted a great deal of attention not only in music media, but in mass media as well.
His relationship with Mihara City goes back to 2010, when Katayama served an instructor for a cultural volunteer training program at POPOLO for seven years, contributing greatly to the development of local volunteers.